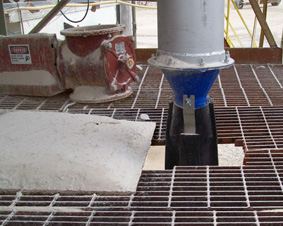 In 2010, maintenance foreman Paul Schaffer decided to look for a better alternative to the problematic rotary airlock valves used to empty the mine’s dust collectors. The highly abrasive limestone dust made short work of the expensive rotary valves and their cumbersome drive assemblies were difficult to access for repair.

Shaffer contacted a dust collection equipment supplier named Aerodyne whose product manager Bart Eggert visited the quarry to offer his recommendations. Once on site he learned about the quarry’s winter shutdown, which left the rotary airlock valves unused for several months at a time. The rotary valves would inevitably rust and jam up during this period, making costly repair or replacement of the valves necessary when production resumed.

Based on the product manager’s recommendations, Mr. Schaffer made the decision to replace Wagner Quarry’s problematic rotary airlock valves with low-cost trickle valves. Because the trickle valve has no moving parts, requires no controls, lubrication, or power supply, it would not be affected by the seasonal shutdowns. The trickle easily handles the abrasive limestone dust and it is a fraction of the cost of the rotary airlock valves previously used.

The negative pressure in the dust collector holds the duck-bill sleeve of the trickle valve closed, creating a tight airlock seal. As a head of material builds up above the valve, the weight forces the sleeve open allowing the dust to discharge continuously until the systems negative pressure automatically re-closes the valve.

Schaffer estimates savings between “$8,000 and $10,000 a year or more” with the installation of the trickle valves. Not only are there major savings on the initial cost of the valves but he says “it frees up maintenance personnel to work on other equipment.”